So what the hell is this Dave Sandwich thing anyway, you ask indignantly.That look on your face. Wtf? C’mon, I’m trying here. At least I’m trying to be funny. What are you up to this afternoon, watching YouTube in your underwear? lol. Oh, right, you’re staring at this… Boo! Go put something on, fix your face, come back with 2 sodas, and I’ll give it a shot.

In fact, as we ain’t doing much today cuz it’s snowing, and Jasper’s asleep on the couch, I just may have time to go into some detail on that for you, there, Chief. Or Darling, as the case may be … look at you, you vixen, like to take this offline? Easy to remember, 1-800-I-am-awesome. Just kidding, I’m really way to old for you, and I already have my hands full with a dog.

Anyway, where was I? I know it may not seem like it, but I do sort of know what I’m doing here, at least before 4:20 pm, lol. I am still – admittedly somewhat haphazardly and with a few random turns – in control of the vehicle. I haven’t quite forgotten where I hid all the stashes. Don’t touch the dials on your set. (FYI, for the data geeks: after 4:20, I lose about 20% on performance and endurance, but I double my imaginative capabilities, increase my hot-dog-a-minute rate by about a half, and boost my amusement and general contentment level by about 500%). I am not shitting you. I told you, I am a dedicated data geek.

*possible timesaving tip on the Davester: if you don’t think that last sentence is an absolute howling riot, you may want to call it quits, because I’m pretty sure at this point that we are just never going to get along. You might as well stop all this annoying reading right now – I imaging it must be virtually crippling you by now anyway – and just go away. Take your toys and go. I really don’t mind. I won’t take it personally. You are just obviously not going to like the taste of your daily Dave Sandwich. I just tested you, and you didn’t do well. Enh. You’re out. These sandwiches can be a little chaotic and spicy; slippery and hard to keep within the bun. NSF people who don’t like surprises. Maybe that includes you. No hard feelings, Bro. And Darling? You’re looking so good. Leave your number on the way out?

So to actually explain a little, and not just mess with your head: I do live in Sandwich, NH. Also, I did bravely and wise-assedly comment for years on politics at the Union Leader editorial section, particularly during heated election seasons. As real first names and town names were used, I became known as Dave, Sandwich. During those times, I have no doubt that I stirred fury in the hearts of many a snarling ‘Rebbubican’ commenter, lol. I can be a wiseass. And you can read a lot more about all of that early history of DS in my very first blog post here on Dave Sandwich.

But for our purposes on this blog, and this page in particular, obviously I have something deeper, more metaphorical, and more cosmic in mind. This whole thing is basically a giant, pissed off art project; a serious and sincere act of ridiculous defiance of a man who has no shame left; a giant techie multi-task that gives purpose to my frequent moniker, ‘Renaissance Man’; a retirement hobby; a place to dump all my stories to give my tired friends a break; a place where if I’m lucky, I might once in a while make you laugh, and now and then make you think; and in the end, something to keep me busy, and keep me from getting too lonely in this quiet house, through the long winter. In the spring I’ll probably go silent for a while. There’s always so much to do.

That’s pretty much it, in a toasted hoagie roll, lol. A ‘Dave Sandwich’, as I’d like to think of it, is unworthy cousin to an idea that Rod Serling (one of my very biggest heroes) might have conjured while chain smoking his Parliaments and thinking about writing the next Twilight Zone episode. So why don’t we just let Rod explain, as he undoubtedly would, in that silky seductive voice, (it’s actually easy to speak Serlingese: just go slowly, and drop off and do a hard stop at every colon or semicolon. If you’re a Zone fan, just imagine you’re feeling a nice buzz and Rod is just starting his intro):

‘Imagine, for a moment, in your minds eye, something like this: a writhing, nascent, fledgling idea; an interwoven series of linked thoughts about a topic; an oddly compelling theory of something; a hopefully reasonable point of view; an assembled set of clear propositions in logical (and hopefully entertaining) order; an alive, evolving, embryonic, ever shifting, ghostly apparition bounding somewhere between matter and energy, wave and particle, space and time; something as big, and as small as the universe on a napkin; something that is yet nothing; nothing that is yet something or other; music that once sung can never be sung the same way again; a swirling, fleeting, miasmic cloud of vaporous emotion; a mysterious but somehow comforting lullaby; perhaps the funniest and most perfect God joke you will ever hear to the end of days; all this, and more that we will discover, together; here in the Kitchen, making a once in a lifetime, delicious Dave Sandwich. Hear that? You with me and the Rod man? High fives all around.

With any luck, a well-made Dave Sandwich is, at a minimum, just a good, solid idea. One that is backed up by reason, logic, sound judgement, common sense, and data. One that’s worth taking the time to write a blog about. One that I am proud to put my name on. One that I am putting my name on. Or at least a version of it.

Those are the things I like to spend my days eating. I am pretty much always hungry, and always in a ridiculous and curious mood. And yes – I always toss Jasper the last bite.

~ 2 slices of any kinda thesis you want. (eternally two – thanks Kung Fu!) . You can’t make a sandwich on one slice of toast, after all.)
~ A healthy slab of philosophical luncheon meat or cosmic veggie spread.
~ The unavoidable condiments of complexity and paradox
~ A thick generous smear of mayogenous, oily humor
~ The salt of the earth
~ The peppery heat of passion and fury

~ Assembled, slowly, in orderly fashion, with care, with openness, with curiosity, with courage, and always with love. Love, I believe, is the key ingredient. Without it, any good sandwich is going to end up tasting like dirt.

So welcome. I look forward to many more tasty, fun lunches with you. Bon freakin’ appetit. 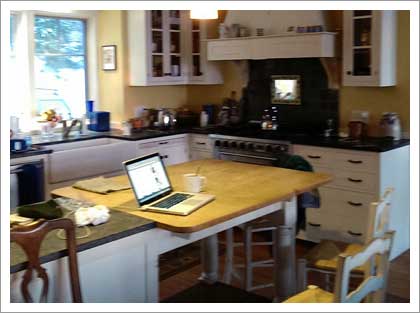