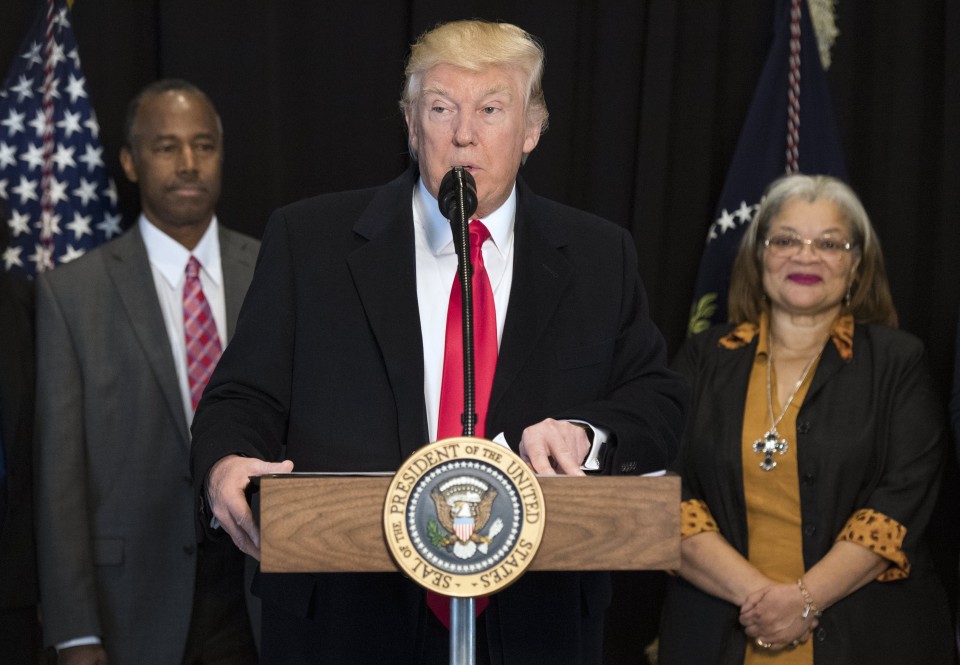 Take a look at this picture. Something about this is very wrong. Or, at least I think it is, though what do I know? I live up here in the White Mountains (and I’m not talking about the snow).

I wonder if Ben Carson (pictured, back left) is going pack his lunch every time the president attends a ‘black’ event, like his recent trip to the African American Museum in DC. Wasn’t Carson actually hired by the aforementioned World’s Best Businessman as HUD secretary, a position overseeing a 40 billion dollar budget, with a nifty salary of over $200,000 – which you and I are paying, even though he doesn’t need it, because he is already a surgeon, loaded, and living in a mansion?

Are they telling me that part of my taxes – and time from your grind today too – is going to pay for Ben Carson to take a day OFF from his job, to accompany the Prez on a photo op to a place he’s undoubtedly already been, all so the President can get some badly needed – forgive me for saying this – brownie points, with a constituency he doesn’t know and isn’t curious about, and even embarrassingly insists on referencing in the same breath as ‘Chicago’ and ‘violence’ and ‘gangs’ constantly? As they say everywhere except DC and the rust belt, puhleeeze…

Let me ask you this, Mr President: as a manager, is that the most effective use of an obviously brilliant resource when that resource has a job to do? That we’re paying him to do?

And don’t you also you also have a job to do?

If I go missing, my guess is that I tripped on reality, OD’d, stumbled Into the fire, and my head is ablaze. Darren, you’re a fireman … Trish, your son also. Please have them come and collect my body, feed Jasper, and stop at Meredith Village Savings Bank on the way home to make some arrangements, my rent’s due on the 15th.

Ed note: I know lots of folks are stressed and don’t want to hear the political stuff. I get that, I really do. I may be an elitist (eliteness used to be a good thing), but I try not to be some snotty elitist who doesn’t listen. But in the end… sorry, can’t help you. You’re going to have to pull the trigger yourself.

First, blessed as I am in life – and I do feel blessed, every day – the loss of my wife, dad, family unity (since back), cool job, dream of being an astronaut, sanity, cat, house, and almost my rights (oops..busted) since 2010, in conjunction with my recent 60th birthday, has left me feeling …. I don’t know, unrestrained in hithertoo profound ways. And I was pretty profoundly hithertoo unrestrained before, as many of you know. Lofl. R.L.: “no, Dave, you’re not really a dick. Though sometimes you do have a dickish personality”. Mic drop.

Second, the ‘other’ side – perhaps that’s your side- won and is now in control. Got that. But don’t relax and break out the beach chairs. And I do kind of feel like there’s a lot of people sitting in their beach chairs, watching the show. But… now is when the actual reality of governing begins, and now the Winners are making arguments that are supposed to make sense, used to set policy which will determine our future. The future of our country. I believe that many of the arguments being made are extreme, simplistic, self serving, and dangerous. If you disagree with me, let’s go – let’s have at it, let’s have that discussion. But I have never before in my life believed more strongly that some things need to be said. And right now. And loudly as we can. Something about us is being lost. Time is of the essence.

One of the things that needs to be said immediately and loudly in every corner of our great land is that the practice of judging whole groups of people by color, by race, by nationality, by sexual preference, by gender, by political party, or hey, by whatever category is simply bad logic (nonsense) as well as bad morality and bad politics. It’s a simple question of random distribution, sample size, genetics, historical patterns, and probabilities. You don’t know diddly about a person, trust me, and if you do run those numbers we Yanks look as miserable as anyone.

It’s also – I believe, and I used to think – a matter of basic Christian values. If you judge folks, they are going to come back and judge you. And you may not be happy with their judgment. Loving your neighbor and working with them is a smarter, more positive, and more elite thing to do than fearing your neighbor and arming to the teeth. You’re always going to be safer with a friend than with an enemy on the other side of a wall. Heck, it’s way cheaper too. Fewer bombs, walls, guns, missing limbs.

So, more to come. Interesting times and there is no shortage of things to reflect on. But unlike our fear-filled leader, I try not to take it personally, or make it personal. I try to keep it funny and light as I can. Some topics are just not light. But I believe we are being oversold the big divide. We are still in agreement about 98% of the governing functions of America. But agreement doesn’t sell newspapers, Trump Tower suites or Mar-a-Lago memberships. Just my 2 cents, for what it’s worth.

Trump ‘Member’: – for the small fee of $200,000 a year (up $100k this year), you can spend every weekend with the president at Mar-A-Lago playing golf, eating shark and lobster and watching the president solve crises like the Korean Missile Crisis in the dining room. Imagine!

Trump ‘Supporter’: – you get to buy your own $5 polyester hat, stand in line in the heat for two hours in Melbourne, FL, then swelter inside an airline hanger while the president demostrably lies to you to distract attention from the toxic mess his administration is creating in Washington. Imagine!

Black WH reporter: Mister President, are you going to meet with members of the Congressional Black Caucus to discuss inner-city policy?

TheDon: What, are they friends of yours? Set up a meeting!